The main use case for this is to have a select drop-down on a website where you can enter a German postcode (e.g. 45130) or a so-called "Leitregion", lead region, (e.g. 45) and then receive an option list of all cities in this lead region. Upon selecting one option you can then query for:

An example client implementation can be found here.

The are three main Redis data types/structures for this specific use case:

Stack for the API Server:

A dockerized NodeJS API based on ExpressJS and Swagger-Node along with the node-redis module connecting to the Redis database. 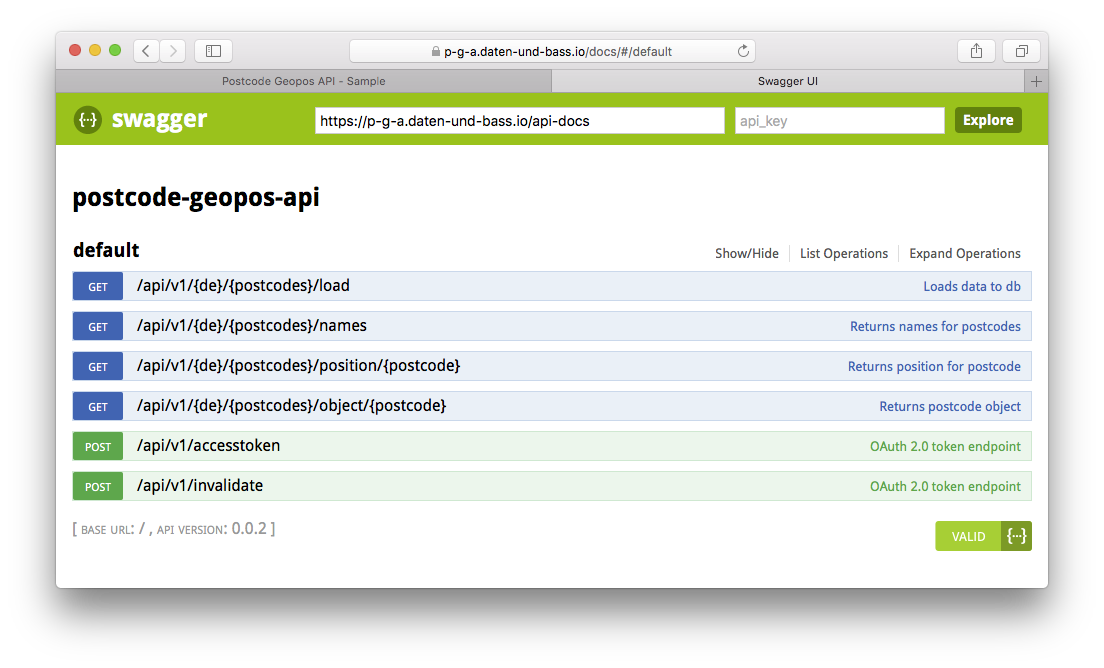 One might argue that there is indeed data redundancy here: The object already contains all information for a given postcode. However, the first two data types are used for two main purposes:

Besides the use case argument, data redundancy here in this case does not harm that much as the data, once imported to the db, remains fairly stable. User access is read-only and postcodes and their geopositions only change rarely.

Main caveat nevertheless: Modeled like this, user input has to be the postcode itself (in order to have the above mentioned performance advantage). The city or suburb name instead would require a scan along with a pattern in Redis which probably, even with Redis, is without good performance from the user perspective and resource consuming from the database perspective.

The following section covers some details on the chosen model and provides sample redis-cli commands for storing and retrieving the data along with quotes from the official Redis command documentation. All these commands are also available in NodeJS in the npm module redis.

One sorted set of postcodes with city names (all with the same score of 0 to have lexicographical ordering by postcode):

One sorted set of postcodes only (score calculated from latitude and longitude as geohash):

"Returns the positions (longitude,latitude) of all the specified members of the geospatial index represented by the sorted set at key."

One Redis hash for each postcode with further information on this postcode (e.g. bounding-box or OpenStreetMap related info):

"Sets the specified fields to their respective values in the hash stored at key."

"Returns all fields and values of the hash stored at key."

This is one example for how you can use Redis data structures and go beyond "simple" key-value pairs.

For sure there may be other ways to achieve the use case requirements here but it proved pretty reliable, maintainable and with good performance - at least during developing, testing and now staging as an early beta version . Source code and live demos can be found in the next section.

Getting Started with Neo4j and GraphQL

This post is a short introduction to data structures available in Redis. Nothing new, right? Right. However, the chosen…